The late Todd Brusco of Danville became the first person ever to hold two simultaneous fishing records at LV when he caught a 45.2 pound striper.

At the time, that was the largest fish caught at the reservoir by 16.53 pounds, and the largest striper ever caught by more than 20 pounds. Since then, there have been several stripers caught in the 30-pound range.

Todd was trolling as he was coming back to the Marina (after catching a limit of trout) in an electric rental boat when the monster bit on his Rapalla lure. It took him 90 minutes to land the fish. He was fishing with 12-pound line!

Todd also owns the largemouth bass record with a 12 pounder caught the previous year. Stripers have never been planted at Los Vaqueros. 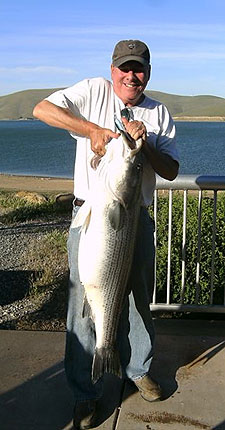