The trouble with looking back on the story of a water district is that its history literally flows through our fingers.

Auto history buffs have yearly line ups of cars. Soda pop historians can look back on rows of curvy-colored bottles to recall past sweet success. At the Contra Costa Water District, a glass of water from 1963 doesn’t look too much different from 1974 or today.

It is refreshing to read an actual piece of CCWD history in a small red book titled: “National Diary 1942.” CCWD’s Nicole Quesada discovered the little diary in the bottom of a file cabinet while remodeling her office at the Antioch Service Center. “I just stumbled upon it,” she said.

The book is the daily hand-written operations report from the graveyard shift District Pump Operators. They inspected, operated and maintained the 4 pump stations along the Contra Costa Canal. They also patrolled the unfinished canal to Pittsburg and sometimes all the way to Clyde for 6-year-old CCWD.

’No Signs of Sabotage’

The diary starts on Jan. 7, 1942, a month after the attack on Pearl Harbor and the start of World War II when fear of another Japanese attack was rampant and sporadic blackouts at night were common. The operators drove along the canal without headlights during blackouts and reported to Sheriff Deputies suspicious-looking vehicles near the canal. When a substation “kicked off” on March 25, the resulting patrol of the power line “showed no signs of sabotage.” 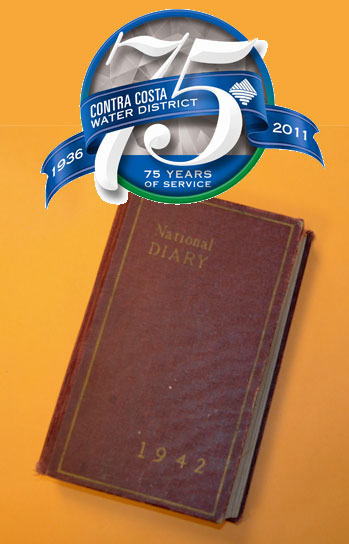 Most of the diary is filled with the routine entries such as how much water was being pushed up the canal, details on operating the motors and reports of pulling grass and moss off the grates at the 4 pump stations. In 1 report, on June 30, an operator tells of working through a repeated problem with a pump at Plant #3, and finally, “I held my ear to the pump, it sounded like there might be something caught in the impeller; weeds, block of wood or fish. Shut it down and started Unit 5."

At least 3 people died in the canal during the year, though the notations are so brief they are easy to miss. On Saturday, October 10, the full page entry started with the usual detailed operator information, then at the end: “found a drowned soldier floating in canal at Pittsburg about 100 yards about Kirker Pass road. Time about 7:30 a.m. Reported same to M.P. at Camp Stoneman.”

Camp Stoneman was a huge troop staging area in Pittsburg that was probably just becoming active at that time. More than 1 million soldiers passed through the camp during the war on their way to and from overseas duty.

Four days later, the writer reported, “I am ‘requested’ to attend inquest at Camp Stoneman at 10 a.m. this morning.”

And that’s it, nothing more.

Two children from an “auto camp” near Oakley were reported missing on frosty cold Thanksgiving Day after going fishing along the canal. The operator that night reported: “I kept a sharp eye out for them, but no indication yet.”

The boys’ bodies were found in the canal the next day by Sheriff Deputies near Pump #1, but that is the only note written about the tragedy. On a happier note, that same day, the operators “pulled a pup out of the canal at Plant #2. He was almost gone. Put him up with the guard to get warm by the heater.”

Flus or severe colds ran through the pump operators in early March. “Abbott feeling pretty sick, but made patrol to Clyde after regular pumping.”

A few days later, “Marchio sick, Abbott back on the job.”

Some holidays are noted in the diary. Labor Day was on a Tuesday, in 1942, and there was no pumping. March 17’s report led with: “St. Patrick’s Day, and everyone is sober.” The entry on Dec. 24 concluded with “Patrol canals, and Merry Christmas.”

When Karl Abbott left for vacation on July 24, there were no notations in the diary for 2 days. Then in bold letters there is this note at the top of the page: “Laughton - Make daily entries in this book regarding all pumping operations.”

Laughton - apparently - wrote the bare minimum, usually about a quarter page, in tight block printing for the next few weeks.

The diary ends on Thursday, December 31 and the final notation speaks to the good work of the graveyard shift Pump Operators in 1942. Despite the war, reluctant pump controls, blackouts, threats of spies, and cold weather, everything was working like it should as the new year was about to begin. "Routine checking of all units in operation. Patrol canal to Pittsburg."