The Water Fiesta in Pittsburg in 1940 continues to fascinate more than 70 years after the huge party took place.

The Fiesta was a 3-day nonstop celebration during unseasonably hot mid-October that drew thousands of people to Pittsburg to celebrate the arrival of water from the Contra Costa Canal.

Everything from motorcycle races, dances, parades for pets and people, even a queen coronation and speeches were part of the program. The “Aquatic March,” was composed specifically for the Fiesta and performed by the Pittsburg Municipal Band, which played at events throughout the 3 days. 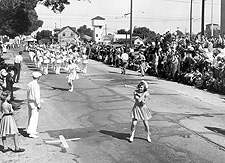 The topper was the Sunday parade, heralded by the Pittsburg Independent newspaper as “the greatest parade in the history of Contra Costa County” with 11 divisions of entries.

The Buchanan’s Department Store float featured a “toyland scene with 5 children,” the 45-piece Pittsburg High School Band was led by a “titan-haired majorette” and the University of California Band was there.

La Jalliscience Grocery’s entry not only had an orange-colored float being ridden by “12 kids symbolizing the old-fashioned courtesy of colonial days” but a band and a car.

Depending on one's point of view, the celebration was an earnest gala that saluted the achievement of the building of the canal that brought great-tasting water to the growing city, or a combination of commercialism and boosterism that provided an excuse to have an event. Whatever the motivation, the Water Fiesta must have been a welcome diversion from a world devolving into war.

A “Flood of Values” sales event - where Pittsburg retailers “slashed prices with abandon” -- was tied to the Fiesta, and the Chamber of Commerce foresaw thousands of new homes being built in Pittsburg since it now had drinkable water.

'The Water Is Going to Taste Plenty Good...'

The water from the canal had actually arrived in Pittsburg 2 months earlier. The city’s water treatment plant had been upgraded in 1938, but the city’s water - drawn from wells -- still tasted awful. The Pittsburg Independent newspaper wrote in an editorial about the coming arrival of the canal water: “The water is going to taste plenty good…it will be a pleasure to take a drink of water without having to gargle to erase the after-taste.”


Amelia DeVito - referred to as a “comely brunette” who also possessed “athletic prowess” as a champion basketball player - reigned over the Fiesta. She was picked through an election process with ballots dropped off at the Pittsburg Chamber of Commerce office. She tallied 496,770 votes, to finish ahead of Kathryn Bruno with 451,820 votes

That’s right, each candidate earned nearly half a million votes! More than 1.3 million votes were tallied among the 6 candidates. In all of Contra Costa County, there were only a little more than 100,000 people at the time. It took 2 days for judges to count the votes.

We’re still trying to figure out the voting process, though you could pick up ballots at your participating “Flood of Values” retailer. The Water Fiesta was held before the invention of the copy machine, so that’s not a possibility.

Attorney Thomas M. Carlson, the leading force behind the community effort to convince the federal government to build the canal as part of the Central Valley Project and later the incorporation of CCWD, told residents to continue their efforts to bring good water to the area to “build the paradise of America.”

His speech took place at a special dedication ceremony, in which Carlson and other dignitaries turned a large valve to recreate the arrival of canal water to Pittsburg.

There were 25 separate events in the Fiesta, including bomb salutes to open the festivities Friday afternoon and fireworks displays on Saturday and Sunday night. An “illuminated motorcycle parade” was held Saturday night, the motorcycle race at Municipal Park was won by Harley-Davidson racer Jack Cottrell of San Francisco.

Five-and-a-half-year-old “motorcycle daredevil” Al Lauer, Jr. led the Pet Parade on Saturday that had 250 entries. There was a soap box derby race and much more, including 4 street dances.

The paper reported the crowds were well behaved throughout, though the Pittsburg Fire Department tended to 3 people who suffered from heat prostration, 3 girls badly burned by the sun and 4 who suffered minor injuries in motorcycle accidents.

The hot weather did little to stop the final street dance, which was attended by 800 to 900 people all “jitterbugging” to the music of Bob McBride’s Orchestra.

War Was in the Air